So, the actual EU Referendum is upon us and the opinion polls reveal nothing but that it is going to be very, very close. In considering all things political, my mind often wanders through powerful figures in literature musing on what angle say, Hilary Mantel’s Thomas Cromwell would be working. What would Jay Gatsby make of Boris Johnson’s hair? What might Madame Bovary think? How would the Mad Hatter vote? Would Voldemort have cared?

Unable to answer these questions as I am, there is one character I feel pretty certain would have been for Brexit and that is Shakespeare’s King Lear. King Lear, were he around today may well have rebranded himself King Leave. And no, as anyone who has not seen/read/has any knowledge of any kind of the play will know, that is not a reason to vote Leave. It really, really isn’t.

If you know the play you will be familiar with the plot in which a vain and volatile old King defies all conventional wisdom in choosing to divide his kingdom between his three daughters. He rejects not only wisdom but basic common sense at every turn, most notably of course in his decision to embrace division over unity. Rather than serve out his time as King of a united Albion, he decides he doesn’t really fancy the whole ruler thing anymore and on a whim comes up with the stellar plan to divide his kingdom between his three daughters, awarding the largest portion to the daughter who publicly flatters him the most. The decent daughter, Cordelia is understandably entirely fed up with her father’s nonsense and refuses to play ball. He banishes her, against the advice of just about everyone.

Unsurprisingly, this foolproof plan does not play out well for the idiot King and what follows is a series of escalating confrontations that allow the more unsavoury characters who deal in cruelty and violence a route to power. Lear, disenfranchised and running mad, ends up naked on a Heath shouting at the wind; another character removes another character’s eyes with his bare hands and pretty much everyone, including the decent daughter (who marries France, by the way), ends up dead.

There are some fun parallels to be drawn between King Lear and the Leave campaign, not least a self-interested preoccupation with ‘th’additions’ of Kingship (status, nice clothes, knights to order  around) rahter than actually doing the job itself. There’s also Vladimir Putin who, much like the play’s malcontent and literal bastard Edmund, is lingering in sinister manner praying for discord while lots of sensible people try to calm everyone down and encourage those spouting visceral unpleasantness to ‘see better’. A stable if problematic regime is replaced by chaos and violence.

Let’s learn from Lear and lead not leave. Otherwise, I fear, we too may find ourselves alone, locked out in the cold, stark-bollock naked, shouting at forces beyond our control who will not take a blind bit of notice.

Klara and the Sun, Kazuo Ishiguro 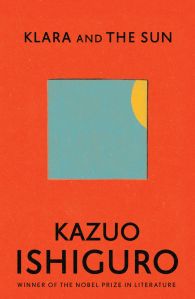