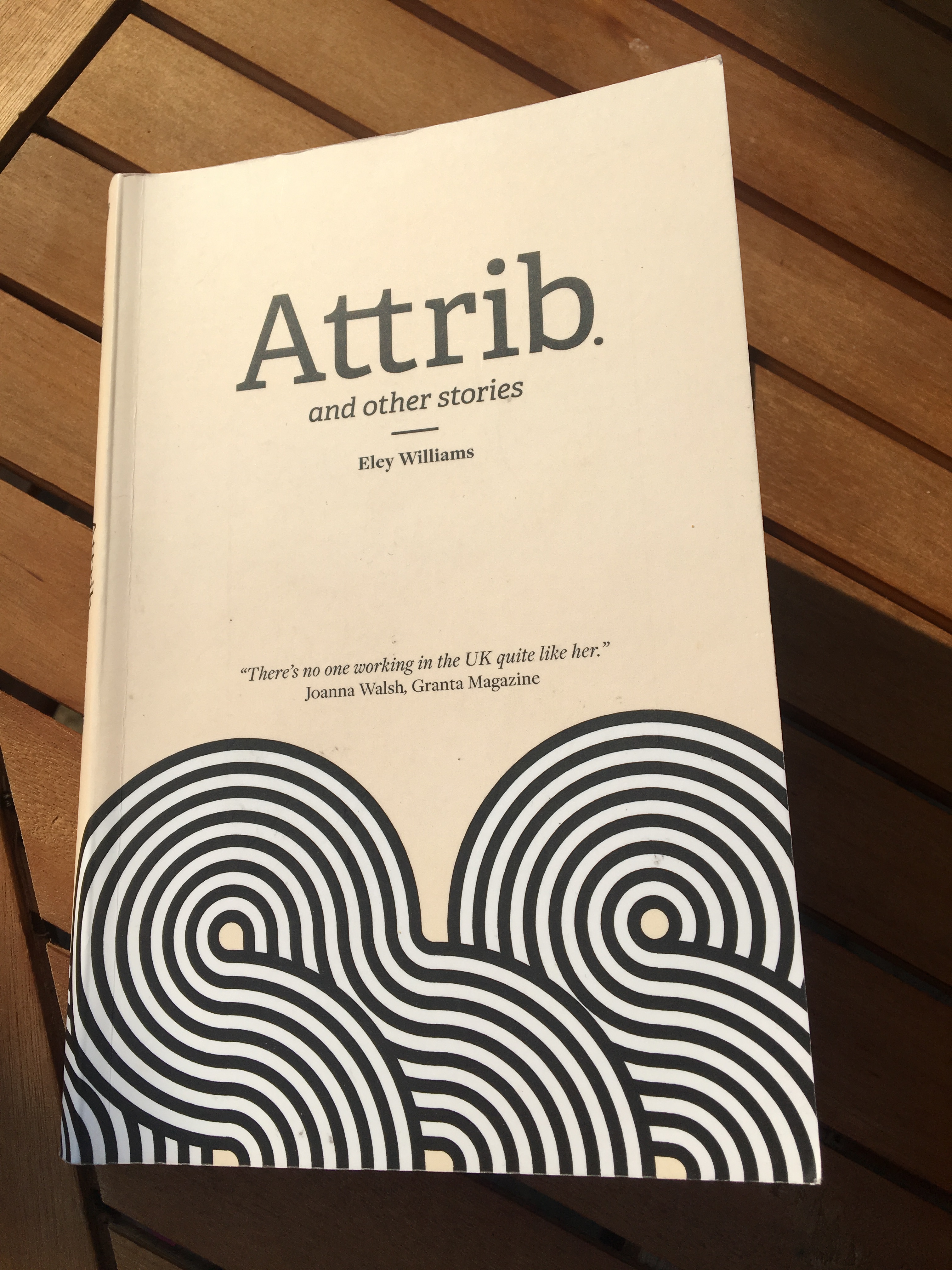 It has been a very long time since I woke up early to finish reading something. To put this in context, I am a teacher who is six months pregnant in the second week of the school holidays; early should not be in my vocabulary. It is then, testament to this stunning debut collection from Eley Williams that I was propped up in bed just after seven yesterday morning (awoken admittedly by husband, duly departing for his commute), tea in one hand, Attrib. and other stories in the other.

To my mind, this is all the more impressive given that it is a collection of stories rather than a singular page-turning narrative. There is a coherence and a commonality to these tales that make them compelling as a body. It is hard to identify stand-out stories because the texture of the book altogether is so fluent and careful in construction. The stories are patterned with images of colour, wildlife, sounds and an overarching concern with the difficulty and problems of language in communicating meaning and connection. They are at once unified and various.

The stories are in some ways very different, from a beached whale to the tussle of the tube to kissing (or failing to kiss) in an art gallery; Williams shifts time and place with a deftness that seems effortless. The fluidity of the prose makes these movements natural, they ripple into one another like the ebb and flow of the first person that dominates the majority of these stories. The ‘I’ ever-circling back to ‘you’ with unfazed depth of affection and feeling. To say it is a collection suffused with love feels cheap, it is suffused with love yes but with all that word connotes too, everything that goes with it: the joy and difficulty of relationships, the closeness and intimacy as well as the gaps and the near-misses.

There is much that is special about these stories, not least the confidence and clarity of Williams’ own voice. She is playful too, especially in her use and consideration of language. One of my favourite sections is in the opening story, ‘The Alphabet’ in which the narrator offers their own visual interpretation of each letter, as a child’s poster might, and:

… U comes as a grin, grossly extended, or an empty jar – if there were forty we would be ready for fairyland thieves, and because you ruin things with beautiful practicality let’s line up an amphora with the lip smashed clean away by vandals: V. Two such amphorae: W. The next letter marks the spot, a kiss or something like the waiter’s brace-suspenders against his fresh white shirt-back: X…

The opening story makes her concern with frustrated expression and interpretation explicit in exploring the dissociative effects of aphasia and the diminution of expressive power that such a loss of language leads to. I am not ashamed to say it made me cry (though the hormones may have lent a helping hand). The text is littered with unusual words and definitions that urge close examination of each, often very brief, moment of experience as she holds it up to the light.

All this makes it sound like hard work but it isn’t. It is clear and precise and, in being so, illustrates the limitations and frustrations of communication between people. Her characters are isolated but beautiful in their isolation and their efforts to break from it. Fittingly, to justly describe Williams’ prose is tricky: words like lyrical and poetic don’t seem to apply. They feel outdated. The fluency and rhythm they evoke have been updated to include paint swatches and sound effects; it feels fresh and expansive. It is tempting to use the word raw to convey emotional depth but this would suggest something unpolished where Williams is meticulous.

In the interests of full disclosure, I was at university with Eley briefly and though we have not stayed in touch with any regularity, I have always liked her (yup, she’s lovely and talented). I say this, not in some sad effort to claim paltry connection to a rising star but lest any of you realise this and think it’s just me bigging up an old friend. As such, I feel bound to point out that I am not the only one who thinks she has produced something rather wonderful. Attrib. and other stories was fabulously reviewed in The Guardian and has been shortlisted for Best Short Story Collection at the Saboteur Awards. Joanna Walsh wrote in Granta that, “There’s no one working in the UK quite like her.” As far as I can tell, she is right.

As I sit here, gushing away, I realise that reading this book is making me (well let’s face it, it’s probably a work in progress) a better writer. I do not want to put a word out of place here, nor ever again.